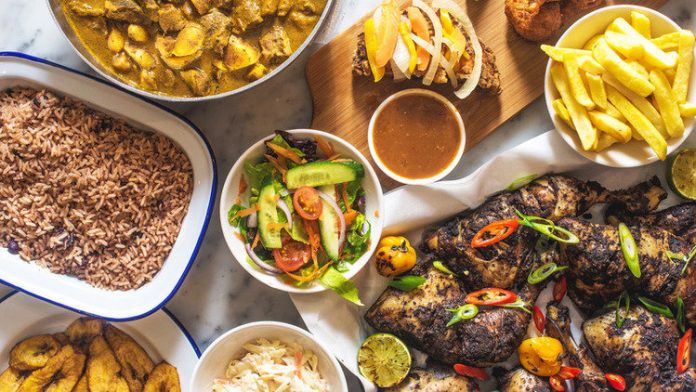 Women have long ruled the kitchens of the Caribbean, but sadly the restaurants of the region do not depict this norm. Surveys have revealed anywhere between 7 and 20 percent female representation within the global restaurant sector— the Caribbean is no exception to this reality.

But a female counter-culture is slowly beginning to emerge. In privately-owned professional kitchens, women like Manuela Scalini, Patrice Harris-Henry, Maria Jackson, Taymer Mason, and Britta Bush are responding to the Caribbean’s outwardly looking culinary industry and offering novel dining experiences that are changing the way the Caribbean and the rest of the world looks at food.

These are not just food professionals— they are revolutionaries. They work outside the confines of a food system that is dominated by processed and imported foods with high rates of hunger, malnutrition, obesity and non-communicable diseases. They are redefining the Caribbean nutritional and gastronomic paradigm with naturally delicious locally sourced food innovations. And what’s more— they are doing it in a field that is overwhelmingly dominated by men.

Manuela Scalini wants her clients to experience the sensory panorama of what it means to live a plant-based lifestyle.

Born and raised in Brazil and educated at the Living Light Culinary Institute in California, and in Bali where she studied yoga and raw food, Scalini’s culinary beginnings were as a raw food chef. She has since metamorphosed to a plant-based and transitional lifestyle practice, which is individualized and flavored with the eclecticism of sacred traditions from different cultures.

“I believe in plant-based foods acting as a catalyst for a deep and long term wellness transformation. Food as medicine. Clean, wholesome foods, using ingredients that are close to their natural state and as local and organic as possible,” she says.

Based in Barbados for the past decade, Scalini is well-known for restorative detoxes, pop up dinners, plant-based education and transformational retreats that integrate clean, natural and organic foods with wellness practices including meditation and yoga. Scalini has also achieved global recognition for her Amazon retreats that combine wild food foraging, plant-based cuisine, yoga, meditation, tribal rituals, and rainforest hikes.

Scalini is currently working an artisanal line of plant-based pantry staples— a counter-cultural response to the highly processed vegan “fake food” market. She is also developing a wellness gastronomy consultancy.

Scalini has infused her passion for health & nutrition, the environment, and ancestral healing traditions into her gastronomy practice. She believes in the old adage of “you are what you eat” but also strongly advocates that, “you are how you eat.” Her focus is on healing by using a holistic approach to integrate the body and mind.

Says Scalini, “To live a plant-based lifestyle is about more than just what you eat.”

With a degree in Food Service Production and Management, Harris-Henry is a culinary magician, morphing indigenous foods into wonderful creations. She sees what the typical person does not see in undervalued but highly nutritious and delicious local produce.

“As a Jamaican woman from humble beginnings, my first foray into cooking as resourceful as a matter of necessity,” explains Harris-Henry. “Today, as a trained chef, I understand the value of local foods from the perspective of health, the economy, the environment and of course— for gastronomic pleasure.”

As the Director of a culinary events company, The Reggae Chefs® Jamaica, she capitalizes on Jamaica’s multi-billion dollar brand, making traditional local dishes and her clients come alive with the unique flavor of Jamaican gastronomic edutainment.

Harris-Henry waves her arm in the air, holding up an imaginary mirror to the agriculture sector and sings in her animated dialect, “look at all that we can do with our MVPs!” [Most Valuable Produce]

Through her work with Jamaica’s MVP’s Patrice Harris-Henry is teaching local communities how to be resilient, self-reliant and of course, very well fed.

Given its rich organic soil, Saint Lucia has among the finest cacao beans in the world and Maria Jackson, who is a pastry chef by profession, had a life long dream of starting her own line of craft chocolate.

In 2011, Jackson began to innovate with organic cacao beans, which resulted in the conception of indigenous artisan chocolate company, Cacoa Sainte Lucie.

“For me the vision behind my chocolate first and foremost is love for confections,” she explains. “I grew up in Saint Lucia during a time that we didn’t make chocolate. We never fully explored the full potential of cacao beans. I really saw an opportunity of agro-processing beyond just the typical export and I invested my all in this business of craft chocolate.”

Jackson also offers Bean to Bar tours in her community of Canaries, where she goes to great lengths to support the local economy and women in particular.

“Craft chocolate is similar to fine wine,” says Jackson of Cacao Saint Lucie. “There is little to no processing involved. We allow the true flavors of the cocoa beans to come through. It is a beautiful sensory experience; given that the beans are so close to their natural state, there are so many flavor profiles.”

The Barbadian chef and best-selling author of acclaimed vegan cookbook Caribbean Vegan (The Experiment, 2016) recently migrated to the United Kingdom where she is re-launching her movement of “sustainable food innovation from the Caribbean.”

True root meat, a high protein gluten-free meat substitute made of pea protein, coconut and cassava, which Mason frequently fortifies with moringa powder, is a central ingredient of her practice.

“Ninety percent of vegan meats contain gluten and soy protein which carries various well-documented health risks. Not only is True root meat delicious, but it is also healthier than other meat substitutes,” she explains. True Root Meat is also a key element in Mason’s arsenal in the fight against global hunger.

Mason’s Barbadian pop-up, Tay’s Kitchen used the flavourful meat alternative in a line of Caribbean vegan versions of well-loved favorites such as pepperoni and Jamaican patties.

Also central to Mason’s practice is a staunch zero-waste ethos. “I see value in foods that often get thrown away,” she explains. “Overripe produce such as bananas and breadfruit can be a key ingredient in so many delicious dishes.”

Mason will be teaching at retreats in the south of France in September; this will be one of her first projects as she debuts her Caribbean vegan culinary creations to a wider audience.

“My advice to anyone working on your passion does not limit yourself and see yourself as a global citizen. I am ready to make a global impact.”

The Owner of Saucha Cayman, Bush says that the motto #peaceloveandfermentation, is quite evident in everything she creates. Bush started off brewing her own curated kombucha flavors in 2008, which are made with her homegrown 12-year-old culture, triple filtered Kangen water, and Guyanese Demerara sugar, and are sold islandwide.

Bush enjoys experimenting with the natural, seasonal flavors within her local Cayman Islands. Client favorites include organic and non-GMO Green Popcorn made with coconut oil and spirulina, a delicious menu of “Disco Soups”, inspired by the Slow Food Movement’s mission to combat food waste, as well as house ferments, such as Purple Sauerkraut, Powerkraut, Kimchi and locally grown Pickled Okra.

Sourdough bread is another one of Bush’s fermented passions, a true labor of love that requires a 36-hour fermentation process which encourages depth of flavor and nutritional value.

“For me, conscious eating is not only about the consumption of nutritious and healing foods but also about being socially and environmentally responsible,” says Bush. “We promote a locally-grown, plant-based, healing foods, with a focus on fermentation lifestyle. We love collaborations with fellow artisans, entrepreneurs and local businesses that educate in a delicious way while supporting the local community.”